So, a while ago ago I had this crazy idea about how it might be nice to create an automated plant waterer for HackLab, so as to keep planty things alive for greater than O(about a week). Around the same time, I was lucky enough to scavenge some (functional) peristaltic pumps from equipment at work that was decommissioned about being tossed, so I brought them in to HackLab with the idea to make this happen at some point. More recently, we heard about a "hack your space" competition for makerspaces, offered by 1sheeld, who make a smartphone controllable, multipurpose Arduino shield that could be used for the purpose of controlling / interacting with the plant watering system. Hence, this proposal (which I'm writing for the second time, thanks to my inability to properly hit "save page" :P

I would like to build an automated plant watering system for the lab, that people could access from the 1Sheeld app to provide the plants with water. I have some spare peristaltic pumps I have harvested from some discarded equipment, that I will connect to a water reservoir, with the pumps controlled by the Arduino and 1Sheeld. We can then set up a placard telling people how to "give the plants some love" by installing the 1Sheeld app on their phone and watering. We may include a daily counter or something of the like so that there won't be over-watering :)

All are located in a bulk barn bag, which I have put back up in the storage area above the DIYBio area for now, though if we get started on the project, maybe it can live in my or someone's box, or a spare project box of some sort.

This likely won't be tremendously difficult project, it's more a factor of figuring out how we're going to accomplish it, wire (and connect tubes) together appropriately, and make it look pretty as well as functional

As many can probably tell you, I (Trevor) am pretty bad at actually getting to HackLab on a regular basis, as much as I would like to life seems to often get in the way. Nevertheless I don't want this project to sit around forever as I feel like it could be a useful addition to the lab. This is also a nice way of venturing into wetlab style / liquid handling activities, that may come in handy for users of the photography darkroom or DIYBio areas of HackLab. So it would be great if others who may be interested in this project could participate and help out, either in planning, building, or otherwise supporting the activity.

Deadlines to keep in mind[edit]

Should we wish to enter the 1Sheeld competition (which, along with the shield, also provides a free year of access to codebender to host any code developed for this project, and the potential of winning an Arduino 3d printer), the deadline for that competition is June 16, 2015. But even if we don't make it in, I think it's a worthy endeavour to make happen, particularly if it turns out to be a warm summer, to keep the plants happy.  :)

Here's a picture of the 3 pumps and other parts we have now. Again, living in bulk barn bag above DIYBio corner of the HackLab classroom. 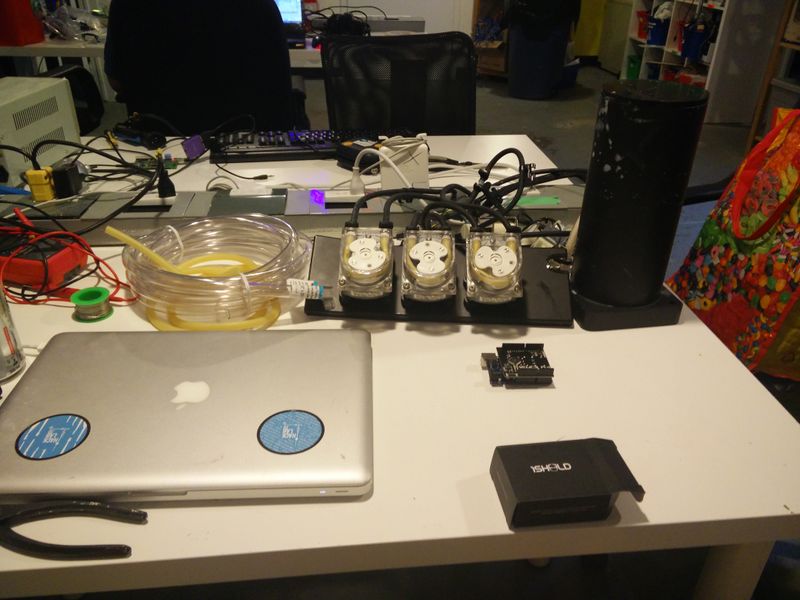