Our laser is controlled by a Linux package called LinuxCNC. To drive the laser, LinuxCNC plays G-code files. G-code is not very standardized, so you should read up on the specific variety of g-code used by LinuxCNC.

Warning: The old version of graster could not be touched off, graster2 can! You can check what version your file uses by checking the .raster.ngc file for "M101" or "M102", the latter implies you're using graster2. To reset touch off position for the old graster: Machine -> Zero Coordinate System -> P1 (the first option).

dpi: The resolution you want to draw the image at, in dots-per-inch. The laser's natural resolution is 1000x1000 so you should probably use a factor of that: 1000, 500, 250. Lower resolution = less run time. This means that 500 pixels in your image will be one inch on the laser. If you want it bigger, you should scale up the image in an image editing program that has good filtering or better yet, get a higher quality source image.

feed: Feed rate for rastering, you can change it later in the raster.ngc by editing the F number.

overshoot: graster2 ignores this and calculates the optimal value at run time! Old graster: The stepper motors that move the laser can't start and stop instantly, they need time accelerate and decelerate. When drawing raster lines, you want to the laser to be moving at a constant speed from one end all the way to the other. We overshoot the end of the image so the X axis motor can change direction without affecting the burn. The default value seems to be enough for even the fastest speed.

Filled rectangle engraved instead of image

Left/Right edge of etch are darker than middle

EMC 2.3 requires all axes to be homed before running any program. If you don't see little crosshairs next to the coordinates of all 4 axes, just click "Home all". If, for some reason, the gantry gets moved while AXIS is running, you need to "Home all" again because LinuxCNC has no way of knowing that the carriage is not in the position it thinks it's in.

Controlling the laser with the Z axis can be tricky because LinuxCNC thinks that there is a moving physical object attached to the axis and tries to constrain its motion. The M62/M63 commands are realtime and instantaneous, meaning that they can be used to turn the laser on/off without affecting X/Y motion, at least in theory. You can put these commands on the same line as a motion command, in which case the laser will be turned on/off at the *beginning* of the motion.

The power of the laser can be controlled from G-code by setting the spindle speed with S#, where the number is between 0 and 1. This will effectively be multiplied by the power level set with the hardware switches. Power level set with the S command is fairly detailed, with at least 50 distinguishable levels. The power can be set so low that it only leaves a faint mark on paper.

Since LinuxCNC automatically turns off the spindle when a program stops, there should be no danger of the laser ever being on unexpectedly. However, just to be safe, you should turn off all laser related signals at the beginning and end of every program. 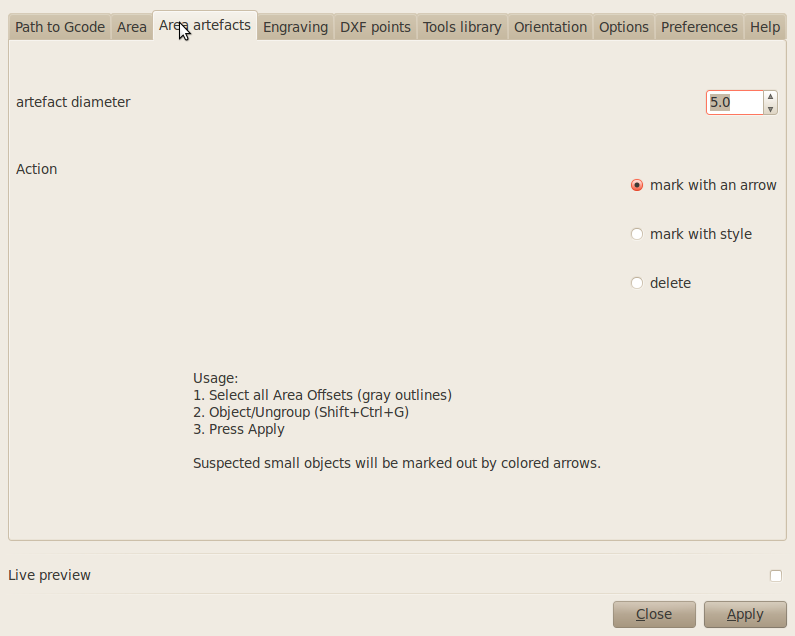